Prepping for 2019 Hurricane Season in Florida

Remember 2018 and all the damage and destruction of the storms across the nation but specifically along the Gulf of Mexico and the Atlantic Ocean.

Hurricanes Florence and Michael caused the most significant damage in the southeastern US. The 2018 hurricane season was the first time since 2008 that there were four named storms active at the same time (Florence, Helene, Isaac, and Joyce).

Forecasters are calling for a hurricane season that is close to normal, which means 12 to 14 named storms will likely develop in the Atlantic hurricane basin between early June and late November. “Of those storms, five to seven are forecast to become hurricanes and two to four are forecast to become major hurricanes. AccuWeather believes two to four tropical storms or hurricanes are likely to impact the United States this year. An average hurricane season has 12 named storms in the Atlantic, six of which strengthen into hurricanes, and three of those becoming major hurricanes,” AccuWeather said.

The National Hurricane Center published the official list of for the upcoming 2019 Atlantic hurricane season. Here are the names.

Tropical storms, hurricanes, tornadoes, hailstorms, and thunderstorms can destroy a roof with their wind and rain combination. They can cause missing shingles, missing metal fascia, leaks and water damage, people getting hurt from flying objects, trees falling, property damage, etc.

The best time to think about a possible storm is now! Before anything happens.

Call your Insurance Agent. Go over your insurance policy carefully to make sure you are current and know what it covers so you have the right policy should you need to make a claim.

Contact a roofing specialist. Check out your roof condition now to make sure you don’t have any possible problems like loose or missing shingles, etc.

Plan ahead for a hurricane with these steps and supplies from Ready.gov.

No. 1 Home Roofing is proud to deliver quality service to its clientele in local communities, and therefore has years of experience in re-roofing and patching flat roofing systems.

No. 1 Home Roofing is a family owned and operated roofing company conveniently located on US Highway 19 in Palm Harbor, Florida. We are dedicated to providing top quality workmanship and materials to ensure that your new roof is done right. We specialize in shingle, tile, and flat roof installation, repairs, and maintenance. Contact us for an appointment and/or estimate at 727-781-7663. 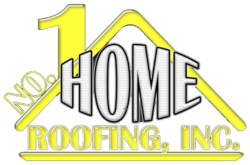 No. 1 Home Roofing is a family owned and operated roofing company and are conveniently located on US Highway 19 in Palm Harbor, Florida. We are dedicated to providing top quality workmanship and materials to ensure that your new roof is done right. Your peace of mind is important to our family!